This artist’s book was a collaboration between myself, a South African artist, and A, an Iranian artist, made during a residency in India, November 2005. Coming from very different cultural backgrounds, and finding ourselves in this strange and different environment provided a complex and interesting mix of realities from which to draw inspiration. Various levels of experience, individual and shared, are recorded here. The photographs by A show his interest in the multitude of gods that form part of the Hindu pantheon in the form of murals, figurines and trinkets. As a Muslim, these references to figurative gods is radically ‘other’. Yet as much as they inform the religion, they are equally used as charms, tokens, sold en mass in a commercial racket. This introduces the layers of contradiction in which a city like Delhi is immersed. Eons of tradition exist side by side commercial Westernisation, men in turbans ride two by two on scooters, stylish weddings are advertised on stained take-away menus. Within the smog infested grey environs, I photographed the surreal splashes of intense colour and tangled webs of cables that cover buildings.

where-we-r, Delhi, India is a paradoxical image of myself, a Christian, kneeling in front of a Sikh temple in a blue turban. This is a continuation of my investigation into the differences between religion and faith. Donning the gear of a Sikh was an exploration of the outward motions and poses of another religion, of their affect on me, and potentially on any observer who would make a snap judgement about my religion practices based on my outward appearances in this instance. It is a further affirmation of how religion is more connected with exterior modes and trappings, while true faith is an internal experiential phenomenon. This theme has particular relevance within this context, where a plethora of imagery, ritual and superstition, reminiscent for me of Catholicism, are one’s overriding impression of this religion. 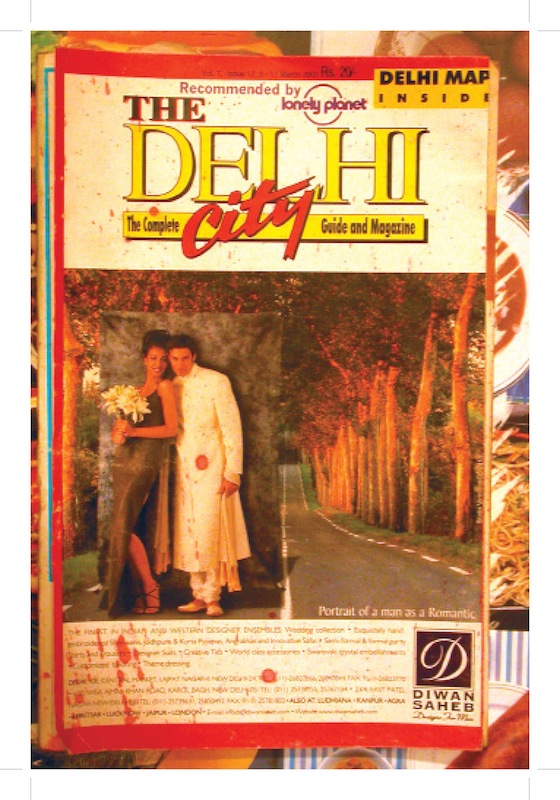